Batty News and Future Research Directions for the Station

The station is home to a number of bat species, both megabats and microbats. The megabats include the elusive and fascinating Eastern tube-nosed bat, Nyctimene robinsoni. These shy and solitary animals are nearly impossible to spot during the day because of their excellent camouflage markings (their wings are covered in greenish-yellow spots, making them resemble a clump of dead leaves in dappled sunlight), and because they are extremely quiet. Therefore, very little is known about their social behaviour or communication, or even their numbers. As the station has recently acquired thermal imaging and bat location equipment to make it easier to observe the "tubies" at night when they are most active, we will be able to look into the lifestyle of these unusual animals a bit more closely in coming months.

The most fascinating development in the station's ongoing flying fox saga is the November, 2018 relocation of the Cape Tribulation wild spectacled flying fox colony to the station grounds - 3,000 or more exuberant, chatty, squabbling flying foxes. It is not clear why they moved into the area, or how long they plan to stay, but because they seem to be feeding nearby, there is reason to believe their relocation is permanent. While this amazing event has offered us a once-in-a-lifetime opportunity to observe the behaviour of spectacled flying foxes up close and personal, it has also caused a sharp upturn in the number of babies who have been separated from their mothers (the colony is also a maternal colony) and found on the ground at the station, hungry and dehydrated. (We have rescued about 70 in the last four to six weeks. The majority of these have been restributed to other care in the region. Several have died, mostly from advanced dehydration, and six are currently in care in the "baby cage", a large, flight-sized enclosure on the station's main veranda. Of the six, five are fully rehabilitatable and releasable, but one has extensive wing damage from a probable python attack and will stay on with us as part of the permanent captive colony.) 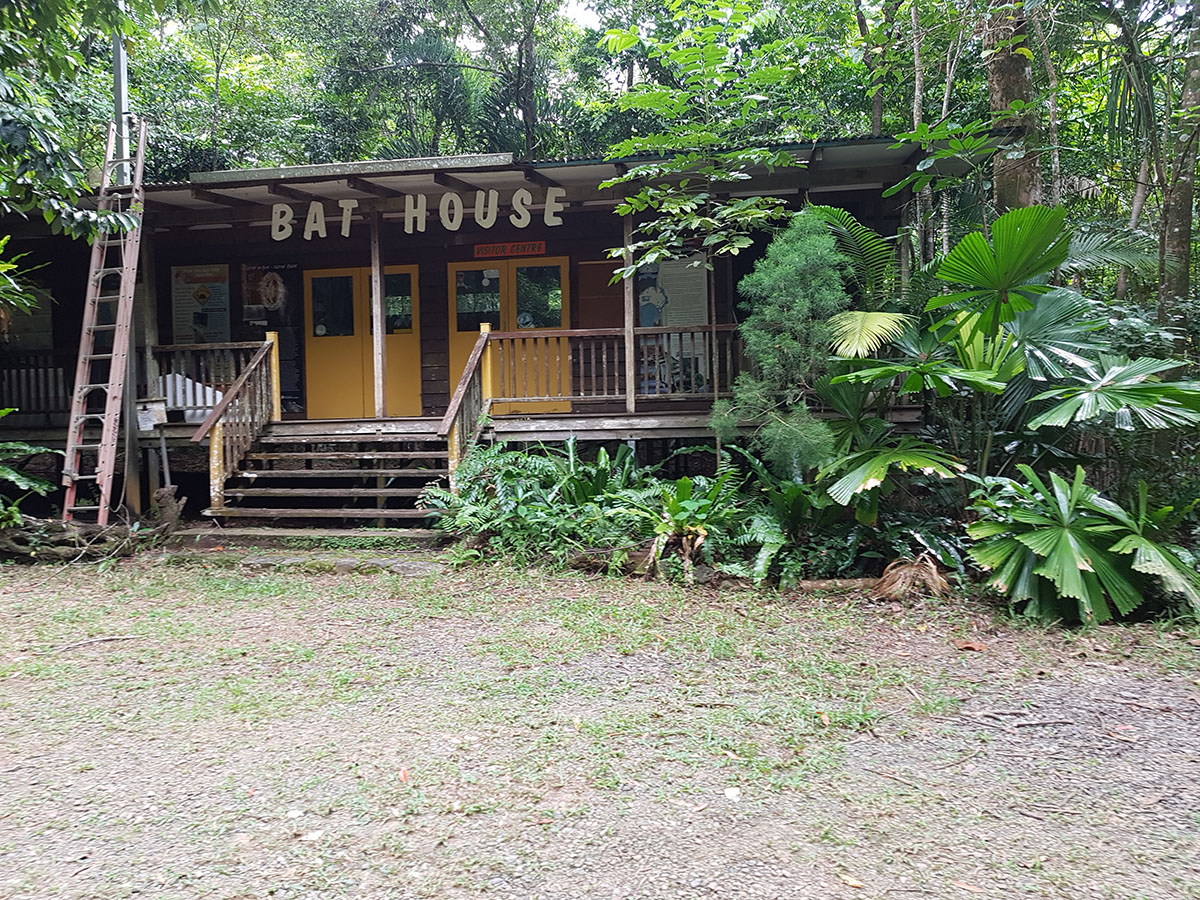 The Bat House is a Wet Tropics-authorised interpretive environmental centre on Cape Tribulation Road at the front of the station. It provides information about the flora and fauna of the Cape Tribulation area. including the iconic spectacled flying fox. Entrance to the Bat House is by a $5.00 entry fee (cheaper than a beer and a lot more interesting!). Proceeds from the Bat House fund the research activities of the Cape Tribulation Tropical Research Station, feed the resident fox colony and help the yearly rescue of orphaned spectacled flying foxes. We also sell books, T-shirts, batty stuff and local memorabilia. All Bat House staff are volunteers. Prior to the Bat House being built in 1991, the land around it had been cleared for grazing and orchards by previous owners. An intensive re-vegetation and replanting effort was put in place and the land has gone from being nothing but open fields to being regenerated rainforest. The building is a passive solar design, and operating power is provided by a bank of solar collectors on the roof. Even the Bat House toilets are green - they are Maxi-Rotaloo composting toilets which are non-smelly, completely silent, use no water, and despite heavy public use, are breakdown-free and have been since being installed.